The best things in our lives happen when we dare to take leaps of faith.  For some people that’s daring to hold someone’s hand or telling a special person that they love them.  For others it’s been when they’ve quit their job, or starting their own business.  For many it’s asking someone to marry them or saying yes and not knowing what that new life will be like. 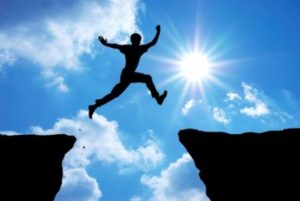 We all take leaps of faith in lots of different ways.  But why?  Why do we do these things?  What is that faith? Why do we find ourselves having to muster the courage to take that leap?   Why do leaps of faith also make us feel so vulnerable? So let’s take a look at this thing we call “faith” in a bit more detail.

For some people faith is a belief in a set of religious beliefs, morals, or practices.  According to the dictionary, it is the “complete trust or confidence in someone or something”.  For others it’s the belief in some kind of spiritual power, not necessarily religious, and that there is a bigger plan out there helping to guide us along the way.

Hollywood has made movies out of it.  “The Adjustment Bureau” showed us the concept of a master plan and how fate can coincide and contradict with what’s right for two people who trust their instincts and their love for each other.  “Sliding Doors” showed us what a difference a moment can make and  that everything happens for a reason – we just have to trust the timing of it.  Disney’s “Brave” showed us the importance of being true to yourself and following your own path to discover who you are and what you stand for.

And so why does any of this matter?  Why should we have faith?  I believe that faith and hope go hand in hand.  If there is no hope, there’s no faith.  Hope is like the cousin of faith.  If I have hope for the future, I have faith in that future being possible.  Then it’s just about making the necessary decisions and taking actions to move towards that.

Hope comes from listening to your inner voice.  It comes from imagining what might be possible.  It’s a projection towards the future. But to hope, I’ve got to have faith in myself, in others, and in the belief that there is something bigger and better out there.  I have to be willing to follow the belief that I am more than I am today.

Without faith, there would be less creativity and innovation.  Without hope, there would be less success.  We get up each day hoping that today will be better than yesterday, with the faith that we are moving closer towards something better than we already have.  And then it’s about us daring to make decisions that moves us closer to our heart’s true desires, and that’s where we need to take leaps of faith.

I started off by saying that “The best things in our lives happen when we dare to take leaps of faith”.  A pretty bold statement.  Or is it?  When was the last time you took a leap of faith?  What made you decide that the leap was your best option?  What happened?

In my personal experience, and in talking about it with others, the most amazing things happen when leaps of faith are taken.  Now I’m not talking about gung ho, kamikaze actions!  I’m talking about following your inner voice. Once you have done all your research and you have all the logic in the world telling you to do one thing, your inner voice is that niggling feeling in your gut, your heart, your bones, your right toe (wherever you feel it!), that tells you to go the other way anyway.

I’ve moved half way across the world because of it.  I’ve quit jobs with nothing yet lined up in the faith that something would materialise when needed.  I’ve left a relationship due to situations beyond my control and in the hopes of not destroying something that had the power to be very special in our memories.  I’ve invested in training and developing myself in the faith that the payback will come somewhere down the line.

And each time, I put in the necessary groundwork, researched all potential options, determined what the right decision was on paper, listened to all the advice and the why’s and why not’s as other people have weighed in, and then done what I “felt” was the right thing to do.

And while I’ve felt very vulnerable at times and second guessed myself, it’s pretty much worked out for me.  You see, I’ve learned that I only feel vulnerable when it’s really important to me.  And there’s been times when I’ve felt more vulnerable than others.  Some of my leaps of faith have been smaller than others.  Some of them I look back on and wonder how or why I had the guts to do what I did.  Some of them have yet to prove their value.  But what I know for sure is that my life has been richer and more interesting because of the small and big leaps of faith I’ve chosen to take.

Well, it’s a little bit of “watch this space” in some areas for me.  In others it’s a “thank goodness I had the courage to do what I did”.  I’m sure you have your own stories to tell, your own leaps of faith to share.  Are you on the edge of another leap of faith?  Are you able to tap into your inner voice and listen to what it’s telling you?  If you are struggling to hear your inner voice, or are unhappy with what’s going on in your life these days, or are searching for a bit of courage and friendly support to move you in a new direction, then contact me to learn more about how coaching can help you.  In the mean time, have a read around my blog to see what other inspiration you can find.