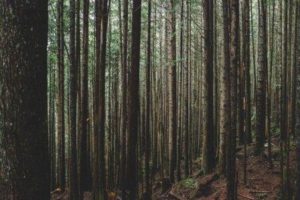 Ever heard that saying “can’t see the woods for the trees”?  It’s one of those sayings that gets used in all kinds of circumstances and helps us realise that we’ve got too caught up in the details to be able to see the bigger picture.

I recently had the pleasure of being able to help a close friend of mine see the woods again.  It’s one of the advantages of being a visitor at times – you see things others who are in it all the time can’t.  This is called perspective.  I had a different perspective to her and I helped her see things a different way that would ultimately create more peace at home!

On a practical level, here’s what’s happened.  Her kids share a room.  They have bunk beds.  In the same room was a dressing table, two wardrobes, a chest of drawers and a bedside table.  And lots of mess because kids seem to accumulate stuff from nowhere!

It was an older house that originally would have had fireplaces in each room.  They’ve now all been filled in but the brick chimney stacks are still there and create alcoves on either side.  While one of the wardrobes was tucked into the alcove, the other was blocked by the beds running along the chimney stack.

Having visited this house a few times, I had my suspicions that the far alcove was wide enough for the beds to tuck in and run perpendicular to the chimney stack.  I had mentioned it a couple of times but there had been no change.  So when I was staying over for the weekend and the kids were at their dad’s, I cajoled my friend into bringing me the tape measure so I could check.  As I suspected, the space was about 5″ wider than the beds, and the bedroom was about a foot longer than the length of the beds.

Pleased with my spatial awareness (it rarely lets me down), I explained to my friend that if we swung the beds around and got them tucked in, got rid of the dressing table as it was just taking up space, dismantled the matching wardrobe that was falling apart, and got rid of the chest of drawers and bedside cabinet that weren’t big enough for the kids’ clothes, then the room would have so much more space.  She wasn’t sure but trusted me anyway and we set to work.

We emptied the dressing table and dismantled it, sorted through clothes and put those that she knew the kids had grown out of into charity bags.  After dismantling the broken wardrobe,  we then had the space to move the beds.  So being strong, capable women, we swung the beds round into their new space.  What a difference!  The kids came home at that point and they asked us if we’d moved the walls!  We now had the beds, one wardrobe and the chest of drawers and bedside table left.  We explained to the kids (11 and 13) that we were planning to get rid of the two units, and keep the wardrobe that they’d have to share.  They were just excited to see the space we’d created.

We then ventured off to Ikea.  The kids had never been and so we spent the afternoon going round the showroom so they could see and make their own decisions (with some gentle persuasion) around what furniture they wanted for storage.  We came back with a 12 cube Kallax (6 cubes each) and a Malm chest of drawers (2 drawers each).  I taught them how to build Ikea furniture and they went to sleep and woke up the following day with a whole new perspective on their bedroom.

We continued the tidying and sorting process on the Sunday morning and by lunch time their room was done.  Clothes that fitted them put away, everything in new home, beds made, lightbulb swapped and lampshade fixed.

It had been a mission.  Here’s what I learned from the whole experience:

This experience was a metaphor for my life.  I often see things others can’t and I facilitate the process to help people to a different future which sometimes means getting directly involved.  I live my life with a vision of contributing to others and the greater good, which at times means I short-change myself.  But by helping others get to their better place, I feel proud and a sense of achievement in their achievement.

The long hours and moments of feeling that it was never going to end was worth it.  I’ve since had photos and videos from the kids all proud of how tidy they’ve kept their room for the first week.  I’ve been on the phone to my friend and she’s shared how grateful she is for creating space in that room for the children and for her.  She’s talked about how the kids are actually spending time in the room this past week and continue to sort through their stuff and how she has stopped avoiding going in due to the stress and despair it caused her.

I share this with you as I’m sure you have had a similar experience.  Where were you able to see the solution that others couldn’t?  Where have you had to take the lead to make something happen and hope that others will follow?  When have you put your focus into being a contribution to others rather than being in service of yourself?

Sign up here to have future articles sent directly to your inbox: